CMA CLAB data-logger is an easy-to-use portable data-logger for STEM Education that can be used with a CASIO Graphic Calculator equipped with the E-CON program, with a PC computer and standalone, in the field and in the classroom.
CLAB is equipped with its own processor and memory, enabling measurements at high sampling rates up to 100 000 Hz with accurate independent timing.
It has FLASH memory to allow easy upgrade of the internal system software and to store measured data.
Additionally CLAB has a built-in 3-axis accelerometer.

CLAB can be used with CASIO Graphic Calculators on which the E-CON software is installed, such as CASIO fx-CG Series, fx-9860GII Series or ClassPad II (fx-CP400). When connected to a calculator CLAB is controlled by the E-CON software running on the calculator. E-CON is a menu-driven calculator application developed by CASIO. It allows configuring experiments with CLAB, collecting the data via connected sensors, graphing and processing the collected data. For more information on CASIO E-CON visit the Casio support page. To connect CLAB to a CASIO Graphic Calculator you need a data communication cable with 3-pin jack connectors (SB-62). This cable is provided with your CASIO Graphic Calculator.

Using CLAB with a Computer

Via the provided USB cable CLAB can be connected to a USB port of a computer and work as a lab interface. The Coach or Coach Lite program (version 6.6 or later) running on the PC controls CLAB. The collected data are transferred to the computer, the measurement can be followed on the computer screen and the collected data can be analysed in Coach. The USB cable is provided with CLAB.

When using CLAB as a standalone device, CLAB controls the data collection process; it collects and stores the measurement data. This is very useful for remote data collection e.g. outside the school. The experimental setup is prepared using the E-CON application on a CASIO Graphic Calculator or the Coach software on a computer and uploaded to CLAB. The measured data are stored in the CLAB memory and can be downloaded into a calculator or a computer after the measurement is finished. This functionality is supported in Coach and Coach Lite starting from version 6.7. 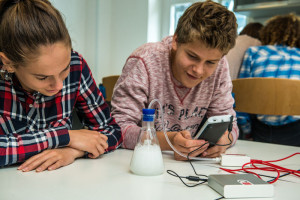